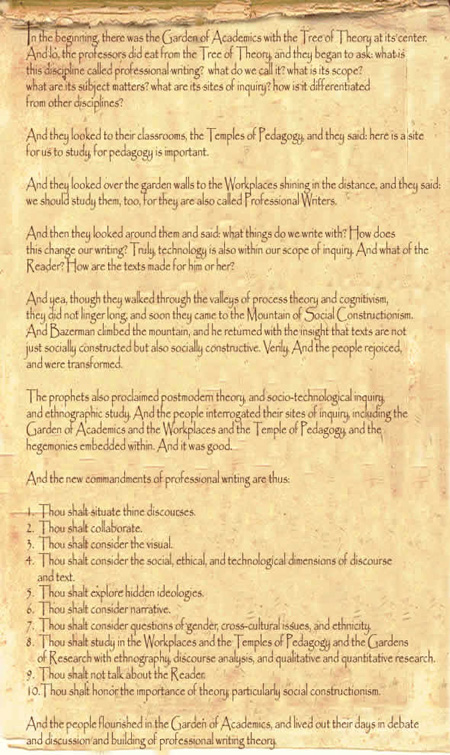 The inscription on the ancient scroll says . . .

In the beginning, there was the Garden of Academics with the Tree of Theory at its center. And lo, the professors did eat from the Tree of Theory, and they began to ask: what is this discipline called professional writing? what do we call it? what is its scope? what are its subject matters? what are its sites of inquiry? how is it differentiated from other disciplines?

And they looked to their classrooms, the Temples of Pedagogy, and they said: here is a site for us to study, for pedagogy is important.

And they looked over the garden walls to the Workplaces shining in the distance, and they said: we should study them, too, for they are also called Professional Writers.

And then they looked around them and said: what things do we write with? How does this change our writing? Truly, technology is also within our scope of inquiry. And what of the Reader? How are the texts made for him or her?

And yea, though they walked through the valleys of process theory and cognitivism, they did not linger long, and soon they came to the Mountain Of Social Constructionism. And Bazerman climbed the mountain, and he returned with the insight that texts are not just socially constructed but also socially constructive. Verily. And the people rejoiced, and were transformed.

The prophets also proclaimed postmodern theory, and socio-technological inquiry, and ethnographic study. And the people interrogated their sites of inquiry, including the Garden of Academics and the Workplaces and the Temple of Pedagogy, and the hegemonies embedded within. And it was good.

And the new commandments of professional writing are thus:

And the people flourished in the Garden of Academics and lived out their days in debate and discussion and building of professional writing theory.